The Oracle of Baal (A Mick Chandra Mystery) - Rebecca Yount 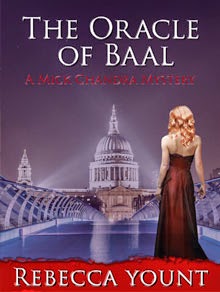 When a prominent stage actress is found dead having apparently committed suicide and having just won a prestigious award, there's only one team that can solve the puzzle.

Detective Inspector Mick Chandra and his partner Elizabeth Chang are the ones to call upon to solve the unsolvable cases. But this time around the case is throwing out a lot of bodies, questions and no answers. How can the suicide of an actress be connected to that of a headmaster in York?

When two more suicides are noted, Chandra spots a similarity. One which is quite odd and out of character - a hat neatly left on a hassock. The people who have died have all been seemingly happy (that is until their untimely death) but another strange fact comes to light. They all talked of enlightenment, the after-life. Could it be they were all part of cult?

After meeting one Dr. Solomon Deal, a revered scholar on the topic of cults, Mick learns so much more and realizes that he has to tread carefully. Upon learning of a young woman that escaped the so called Oracle of Baal, Mick travels to York to visit the emotionally traumatized young girl and discovers a cult that is truly disturbing.

How high up does this cult extend? What are they doing with the significant amounts of money that they have received? With the enigmatic leader Madame Love proclaiming the organization as a self-help group, the inspector will have to call upon the help of his friend Jamie. By infiltrating the suspected cult, can Mick bring the brainwashing to an end and justice for the families left behind?

This is the best Mick Chandra mystery so far. With a captivating subject matter and written so well, it's an absorbing, can't put it down read. Further details are discovered on the main characters adding new dimensions to already rounded figures. Yount's eloquence with handling a fairly sensitive topic is intelligent without glamorizing other well known cults. She manages to give facts and theories without digressing from the plot - a plot that is unpredictable, tense and exciting.  A highly recommended read.

I received a complimentary copy of this book from the author to review. The opinions expressed are my own and I am not required to give a positive critique.
Posted by Shalini at 18:50